The law makers commends on the evolution of female leadership.

The female members of parliament of the 10th legislation, visited the National Museum to make an appraisal of the evolution of female leadership as law makers in the National Assembly of Cameroon.  The visit on Monday, March 15, 2021 headed by the eldest member of parliament, Laurentine Nkoa Mfegue, brought together present female MPs and some predecessors who in the past had similar honours as they have today.

The evolution of female leadership at the National Assembly from the first legislation to the present legistlation has given the MPs reason to be proud of the steps they are making in leadership position in this country. According to Honorable Mbongyor Naomi Ngando from  Ndo, it is impressive to see that, they has been positive changes from the first legislation with   only 7 female parliamentarians to 61 today :  » When  I look at the exibition, I noticed that from 1978, they were only 7 female members of parliament and only 1 in the bureau, but progressively as things were going on, the next mandate came up to 12, followed by 27 female MPs and in the ninth legislation, they were 57 and in this tenth legislation we are over 61. That means, there has been an increase in female leadership at the National Assembly as well as the bureau ». 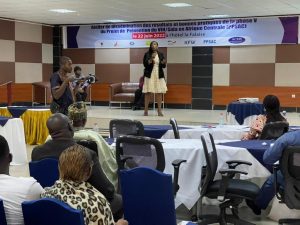 Including women in the management of the state affairs is the best thing the government has done, since the female folk are in a way best leaders, wonderful managers who can join heads together with the men to develop the country. She added. Honorable Laurentine Nkoa Mfegue the eldest member of parliament on her part, sees the visit to the National Museum as an initiative to be applauded. I see, the female leadership exibition is done in an artistic manner. I noticed that the exibition is well exposed even without reading the pages or scriptures. She said.Such initiative to the female MPs can only be attibuted to the engagement of the President of the Republic, who has always wanted women to be involved in the managment of the affairs of the country.